Gallery of Woodcuts by Hans Holbein 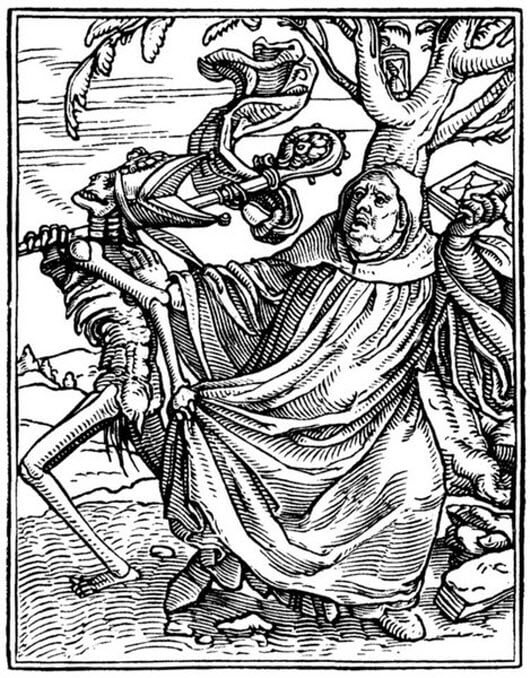 This section consists of a rich collection of beautiful woodcuts and illustrations of the dance of death. The dance of death was a stylized depiction of death as the ever present companion of life. Usually the figure of death was personified as a skeleton dancing his victim to their deaths.

The Dance of Death is an important literary and visual allegory serving as a reminder of the transitory nature of human life as well as the idea that no matter your standing in this world, you would eventually dance the dance of death. As such it was used as an inspiration and subject by many artists, some known and others anonymous. Although the details varied, the concept was the same and provided a continuius threat and theme through the art of the middle ages and the Renaissance, and even today.

Hans Holbein would mine this rich theme of allegory which illuminates the human condition on several occasions. The first was a design for a sword scheathe, emblazoned with images from the dance of death. The second time was to create an alphabet based on figures and images from thd dance of death. Finally, Holbein's masterpiece was the creation of a series of woodcuts depicting various types of Reneissance people - beggars, churchmen, emperors, and children - meeting their doom. In his conception, some danced willingly, while others resisted, but in the end all danced death's tune.

The series of woodcuts created by Hans Holbein are generally regarded as representing the pinnacle of artistic depiction of the dance of death, at least during Renaissance period. These illustrations can be viewed here, in the same sequence as they appeared in the original series of woodcuts.

In the near future we will also be adding other versions of the dance of death, depicted and imagined by other artists including Thomas Rowlandson.